Who is the sound engineer? 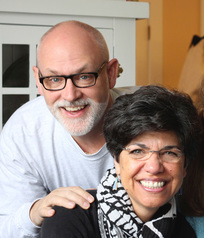 ​Dámaris's husband, Rod Carbaugh, travels with her and mixes her concert appearances. He has worked with sound for the Brooklyn Tabernacle Choir, BT Singers and other Christian groups and artists, in such venues as Madison Square Garden, Radio City Music Hall, Her Majesty's Theatre in London, and scores of churches across the US and in many other countries.

Since all of his sound gear for Dámaris's concert appearances has to travel on planes as luggage, he has hand-picked certain small but very professional pieces of equipment to enhance her concerts. For those interested in the more technical aspects of things, we have compiled a list of the esoteric gear which makes her concert-goers exclaim, "We've never heard this church's system sound this good!" 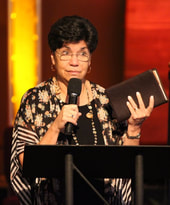 Shure ULXP/BETA87C - Rod chose the Beta87C capsule because the cardioid pattern is supposed to have a sweeter sound than it's supercardioid brother, the Beta87A. Our hardwired backup, however, is our old standby, the Shure SM85. Now a collector's item, this condenser mic is the grandfather to the very popular Beta87A vocal mic, with a sweeter sound. Shure has great products and better support!  Frequency set is J1 (554-590 MHz).

Shure PSM900 - Reasonably priced in-ear-monitor systems came around just when Dámaris began to be concerned about her vocal stamina. Working with a variety of low budget church monitor wedges, she was not able to do multiple concerts in a weekend without concern for losing her voice. When Rod bought the first PSM600 system, she told him, "You just added 20 years to my career!" Now, they use the PSM900 system which gives them lots of available frequencies to avoid local RF problems.  Frequency set is G7 (505-542 MHz).

FutureSonics - These custom-molded earbuds are the "best headphones" Dámaris has ever worn. Since she has done studio work for over thirty years, that is impressive. In fact, even though she could have any headphones she wanted in a studio, she recorded one of her CDs, "No Apology" through these FSI Ear Monitors.

QSC TouchMix-8 - Rod and Dámaris travel with a QSC TouchMix-8 digital mixer.  Combined with her mic and IEM, Rod has all of the tools and flexibility of a little recording studio with everything necessary for Dámaris's concerts.

What we need from the hosting sound crew 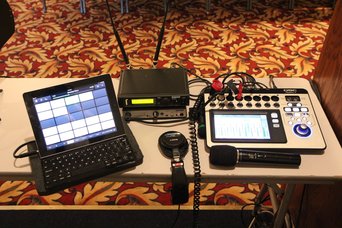 I bring one case which has my digital QSC TouchMix-8 mixer, Dámaris's wireless mic, her wireless in-ear-monitors (IEM), and various connection cables. I also bring cases with CDs for sale. All of the above goes on the plane as luggage, but might not fit in the trunk of most sedans.

What I do NOT bring are any speakers or amplifiers.

I can set up anywhere that I can hear the room well, including but not limited to the installed mix position (FOH). As my mixer is small, I can operate from a pew if I need to. Since her mic and monitor systems are wireless, and located with me, I simply send back a mixed line level feed (mono or a stereo pair) to the house mixing console. Once levels are set, it is best that the house sound engineer does not change anything, as it indirectly affects what is going into Dámaris's IEMs.

From the house sound folks, I will need one electrical outlet at my mix position.  I will also need some mic cables to make the run to the FOH position. Other than that, I bring all the cabling I generally need.  Wherever I set up, I will need about 3' of space for my mixer and other hardware.

​Our sound checks are short, but necessary. For evening concerts, we either come at a pre-arranged time in mid-afternoon to set up sound and product, or we come about two hours before the concert time. The former is more convenient for us so that we can go back to our hotel room and change clothes, etc., and then arrive to the site shortly before the concert. The latter option necessitates that Dámaris has to be dressed for the concert before we arrive to the church and set up. We do understand that this is usually easier for the church sound crew, so that is occasionally our only option. Generally this is discussed well in advance so that all parties understand their expectations.
Proudly powered by Weebly